From KnowledgeLab
Jump to navigation Jump to search 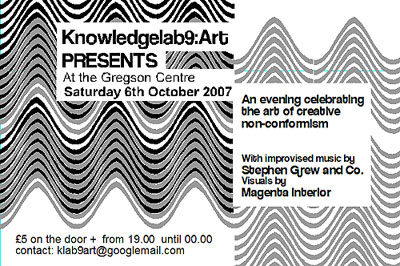 Two international musicians pianist/elctronics Stephen Grew and Antti Saario electronic manipulations and sonic carver. Each based in the good old city of Lancaster, home to millions of great musicians!

Bikini Kill is the name of this set and is an homage to the punk girls band with the same name. As a VJ set, Bikini Kill is a mix of collected objects which are represented in film and that are played live during the performance. These objects are part of the performer's personal history, collected during travelings and in more random and common situations as a visit to a shop. These objects are sometimes also allusions to a dream. The material is transformed in elements for the performer to tell a story, that is a response to the mood created by the music and the reaction of the audience. The material is performed using DVD players, computer, visual mixer, cameras and rotating devices. There is in this set a play with the concept of realtime in the past and present. Part of the footage are recordings from previous performances. As the material is played at several venues, the amount of footage increases and changes, turning each performance into a new experience for everyone (including the performer).